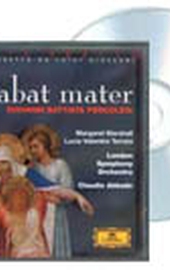 To fully understand the scope of this work, one must first of all keep in mind that it is the expression of both the culture of a people and of the personal experience of its composer. (...)
One sole rule guided his now exhausted hand: that the words, bearers of experience, must emerge in absolute freedom and the song serve only to give them back their original life.
The story of the last days of his life is very moving:
"Francesco di Feo, renowned master of music who loved him tenderly, having come to visit him, and seeing that he, lying in bed, was working on finishing his composition of the Stabat Mater, scolded him harshly, saying that the condition of his health deserved a completely different kind of treatment. But the poor young man replied that he did not want to die before finishing the work for which he had already been paid ten ducats: 'And maybe,' he added, 'is not worth even ten pennies.' Feo returned a few weeks later and found him much worse, to the point where he could barely understand from Pergolesi's dying lips that the Stabat had been finished and sent to its destination. A few days later, on 16 March 1736, Pergolesi breathed his last."
Finis, Deo gratias, the last words written by his own hand set the seal not only on his masterpiece, but also on the brief existence of the young man who in the final "Amen" of the Stabat Mater raised from his physical state benumbed by illness the most resplendent cry of thanksgiving for the mystery which redeems through pain:
"Tradition has it that in his very last instants Pergolesi was seen to contemplate an image facing his bed, and anxiously gazing on it with his chest heaving, wept: this was the image of the Sorrowful Mother who the author of the Stabat called his heavenly Muse."