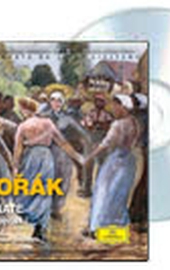 Dvořák's Serenades are striking for their simplicity and immediateness and, at the same time, for their profoundness. The music of Eastern Europe, unlike that of the West, has a profoundness that cannot fail to carry in itself, to seek and to feel the essence of the people. It listens to the people, it is an expression of the people, it has the people as its dimension, and it creates the breadth of this dimension. Western music, instead is more individualistic. For the East, the dimension of the individual's awareness has the breadth of the people: man's strength and security lie in what is for everyone, for the people. It is not possible to say fully the word "I" if not in a "We," if not in a people. The whole of man's entreaty, the entreaty of the individual man, is not left to his desperate solitude, but is enfolded and broadened, shared in a wider ambit, which throws back its borders and accompanies it in the search for fulfilment, for an answer.