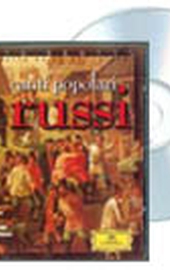 Russian folk songs belong to a tradition whose origin is lost in the mists of time, although the earliest manuscripts collecting them date to the seventeenth century. This gap in time should not surprise us, considering the fact that for many centuries this vast heritage was passed down from parent to child with the aid only of memory, both personal and collective.
Songs have always accompanied every act of the Russian people, from the most humble and everyday like work in the fields, to the solemn events of life such as weddings and funerals. Through songs were synthetically expressed man's wonder, fear, and hope in the face of the mystery of reality. This whole range of expectations took on, in pagan times, ancestral, magical, and mythological characteristics.
The arrival of the Christian message in the tenth century did not erase preceding attempts at explaining the world, but made good use of this tradition, proposing a new relationship with that mystery. (...)
In Russian folk songs, the music envelops the texts, opening for the words new horizons and often introducing contrasting elements: in this way emerges, even in topics that in themselves are quite banal, an unexpected profundity. For this reason, songs whose words are sad can present an energetic, lively rhythm and an agile melody which lead us to view painful experiences with resignation or a smile, while, conversely, songs whose contents are happy often have a melancholy melody and a slow rhythm, inviting the listener to meditate on the fleeting nature of things.
The melodies, especially in solo songs, have a very broad range, and they make use of long intervals, calling to mind the vastness of Russian landscapes stretching toward a boundless horizon; one's gaze, losing itself in their unlimited depths, is led to a perception of the mysteriousness of reality and a nostalgia for the Infinite.